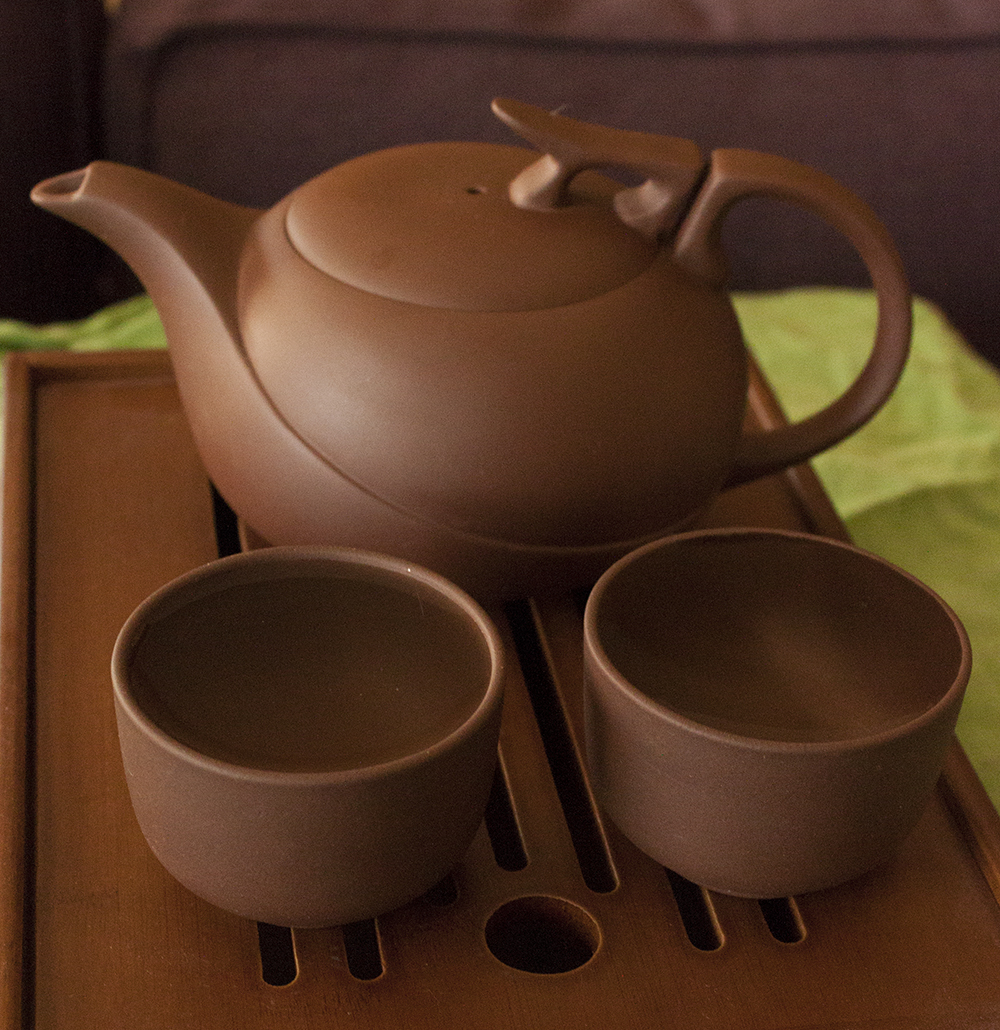 I recently decided to go about seasoning my Yixing teapot for a blog post, seeing how it kills two birds…both a blog post for here as well as a Facebook post for those following Drink the Tea. For those interested in following along at home, I used the process outlined here for seasoning my teapot. Some sites seem to advocate a combination of heating and then quickly cooling the clay as the proper method, stating that if your teapot is the “real deal” then it’ll be able to handle it, but my basic grasp of physics told me this seemed like a bad idea and I just didn’t want to take that risk. I’ve had this tea set for a while now…I received it either as a Valentine’s gift or an anniversary gift from Evan at least two years ago, so aside from lack of use, it’s a bit special to me. Not only have I been hesitant to go through the tedious process of getting the teapot seasoned correctly, but first I had to choose just ONE kind of tea that I would be making in this pot.

I knew whatever tea I chose needed to be:

At first I was thinking going for a pu-erh was the solution…pu-erhs are delicious, but the logistics become a bit of a pain. Do I invest in a large cake? Will I be able to find the same “brand” of pu-erh again later? Still, I was leaning in the direction for a while. Yellow teas were ruled out pretty quickly, even though they decidedly met all of my criteria, they are wildly expensive. I am simply not into Lapsang Souchong quite the way that Evan and Vivian are…I find it occasionally drinkable, but I’m not particularly excited about doing so. This left me with black teas and oolongs. Black teas (to me) are “just teas”. They’re nice, and I probably drink them most often, but overall there aren’t many black teas worth writing home about. Finally, while out and about in Boulder with Evan we stopped into a tea shop (Ku Cha) and they just so happened to be sampling out some really nice milk oolong. I think a lot of oolongs are hit or miss, but I was instantly a fan of this tea…it has a lot of the “buttery” characteristics found in a yellow tea, as well as being naturally pretty sweet, a bit tangy, and not too dry.

I knew the process was going to take some time, but I didn’t expect multiple rounds of “let sit overnight” as part of the process. I essentially did the whole process in two days: I rinsed and soaked the teapot from about 10am until about 8pm or 9pm, then cooking the set with the tea in a large pot and leaving it to sit overnight, then performing the second cooking the following day. Maybe this was wrong, and I was supposed to let the teapot soak for 72 hours…I dunno. 36-48 hours seemed like enough. I also interpreted “boil for 30 mins/1 hour” to mean “hold at a high temperature for about that long”…I neither timed how long the boil went on for (aside from working on in the meantime, which typcially takes about an hour to do) nor really brought the pan up to much of a boil (more like a slow, lazy bubble periodically). I also probably should have used a pan that was slightly taller…when the set was soaking overnight in the pan of tea, eventually enough was either absorbed by the tea set or disappeared through evaporation that the entire handle did not remain submerged. It adds some personality to the set though. Here are some pictures of the pot after seasoning. 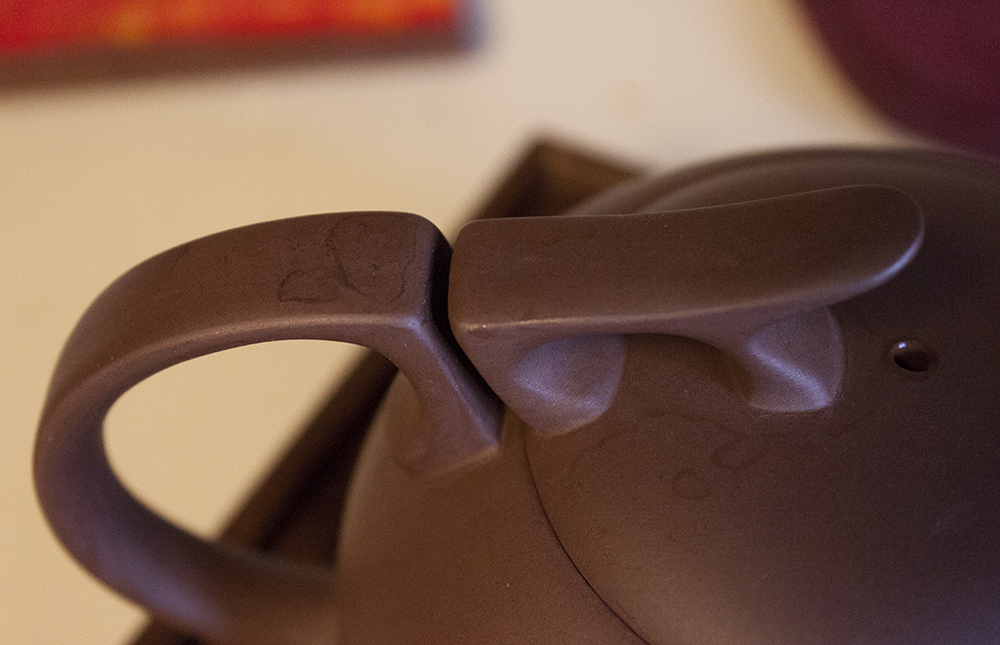 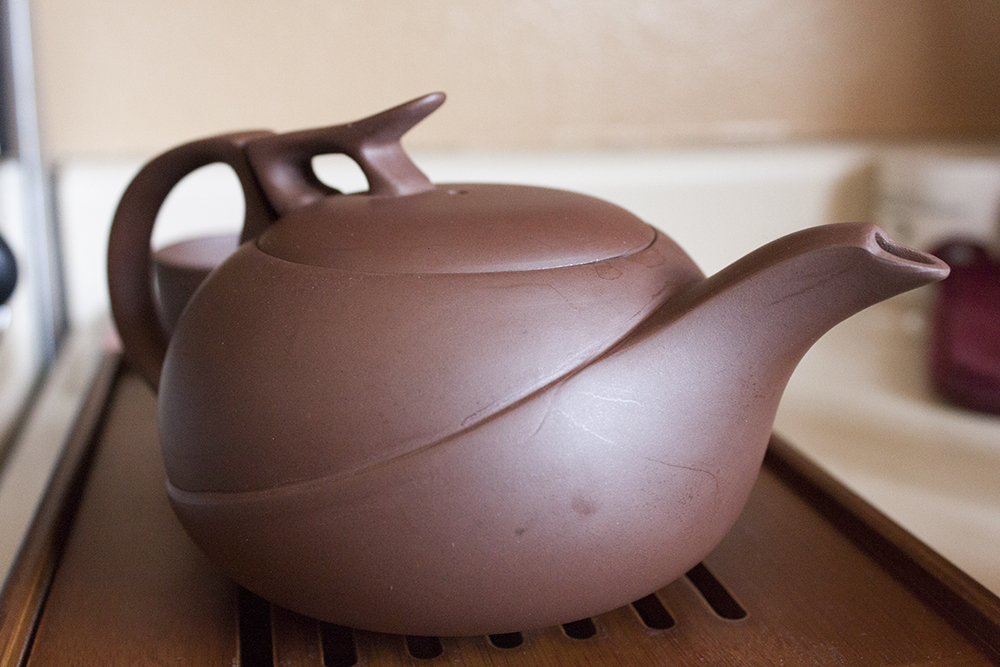 I really like the earthy, metallic essence that the teapot brings to the tea. The cups are thin enough that they become a bit moist with the hot tea inside of them, which I find inviting to feel while holding the cup and drinking the tea. The pot itself keeps the tea pretty warm, but the same cannot be said of the cup. It gets cold pretty quickly. I usually take about an hour to drink through a pot this size, and by that time, the last of the tea in the pot was also a bit cold.