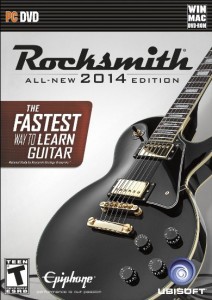 One of my Christmas presents this year was Rocksmith (PC). I’ve used a handful of digital guitar lesson softwares in the past and wasn’t particular impressed with any of them. I have a hard time learning when I’m not receiving specific feedback or personalized “here’s what you should work on next”, or minor things that only something very intelligent can tell you, such as “no, that sounds completely awful and wrong”. I haven’t had the money or the ability to make it to weekly lessons, and let’s face it…practicing the same 5 chords that someone thought up as “good practice” for the whole week between lessons is beyond boring.

Rocksmith is split into a few different parts: videos for different techniques (and accompanying simple exercises and riffs for practicing what the video is teaching you), songs much like how you’d play a song in Guitar Hero or Rockband, an arcade with mini-games that help you build various skills with ridiculous graphics (play the right chord to shoot the spaceship! Play the right string to hit the incoming bandits!), and the ability to play around with different guitar equipment to create different sounding guitar effects, which can then be used in the rest of the game. I think there’s also a songwriting/recording mode, but I’m not 100% sure.

The videos aren’t confusing or distracting, and feel like they’re actually trying to assist you…they’re very casual and conversational in tone and are narrations (by whoever this rock-bro is) over a headless individual dressed in cool clothes (men AND women!) with a really nice guitar showing you how to do whatever it is you’re supposed to be doing. You can play with them while they’re going over the lesson (which would be kinda rude to a real human) and it’s really easy to repeat, slow down, or breeze past whatever you happen to be learning (depending on your skill).

I think the game itself is awesome. It clearly explains what you’re doing and why. It’s super encouraging when you do things right: even to a level that would be extra weird and over-the-top coming from a human, becomes incredibly welcome to hear and nearly genuine-sounding coming from a computer. Playing a simple chord right after 4 or 5 botched attempts and having the game go “Sweet! You nailed it!” makes me giggle with accomplishment.

Little “missions” are given periodically and these help to keep your attention by not having you focus too long on any one thing. Today I spent time playing a couple different songs, worked on a couple sections of a particular song a couple of times, played a couple of arcade games which definitely speaks to the gamer in me (e.g. “let me try again, I know I can get a higher score this time”). After that I played around with building my own guitar tone…I made something truly hideous and crunchy based on the equipment they let you play with in the game. This appears to be (I assume) the way you’d actually use pedals, distortion, and amps to alter the sound coming our of your instrument, which is a fun way to play around with tones without owning all of the equipment myself (yet).

Playing songs right off the bat is honestly a huge deal. I’ve done lessons before where you try to struggle your way through a song, accompanied by your teacher, usually involving a metronome or some other form of way to keep time…it’s not very natural-feeling. That said, it’s impossible to really just jump in and play a song without having some prior knowledge of a guitar. Being able to play notes over a song I’m familiar with makes me feel considerably less like an idiot, and a lot more like I’m participating in the music. On top of that, being able to easily slow down or focus on a particular part (sometimes when the notes are thrown at you for the first time, it’s hard to know what’s going on) with a couple clicks makes it so easy to improve where it’s needed. If you don’t take advantage of this while playing through a song, the game will recommend you do so after the song, and isolate where it thinks you need more work.

I assume that most of the frustration I’ve had with the game comes from the fact that I’m playing an acoustic guitar with a stick-on pickup. Sometimes the roundness of the sound and the reverberation from the guitar gets picked up as errors or missing a note, and getting certain chords to register has been nearly impossible. It’s just not “clean” enough for the software. Some lessons and techniques are definitely electricentric and don’t work well at all on an acoustic, such as sustaining a particular note: it reverberates like hell but after a few seconds it stops being picked up as the correct note, and then the software counts that as a fail. I have no doubt these things would be a non-issue on an electric guitar…I’m hoping to pick one up for Evan and me to share in the next couple of months.

After using it for a little over a week (though not every single day) I am definitely improving, and the game is always a little more challenging than what I’ve mastered so far. Not only that (and something I didn’t quite expect): much like other video games, I really want to play more than just an hour a day. I want to spend a day playing the game. I know I could do that, but I don’t think I’d become much better at it. I know from a learning standpoint, it’s better for me to play an hour or two today and another hour or two tomorrow, instead of playing 5 hours today. Feeling like I’m only getting tiny doses of the game is keeping me coming back for more.

The downsides of the game?

The website support for Rocksmith is abysmal. First you’re on the Rocksmith site. Then you’re on the UPlay site. Then Ubisoft. Then back to Rocksmith. Each tells you to go to a different place to track your progress for their 60-day challenge, or to download a song; I have yet to find the right spot for any of these yet.

Also, the initial tuning was a nightmare, but my guitar was SO far out of tune…I ended up tuning it roughly on my own before the game would stop seizuring and give me helpful feedback in regards to where my tuning was off. Now it works pretty well, and I can quickly move from standard tuning to any other tuning I may need for the song I’m playing. Sometimes it’s hard to figure out what to do, and tuning takes up a good chunk of time I could be playing.

I’d also really like to see extra support for extra-stringed instruments, as right now it only knows how to teach 6-string guitars and 4-string bass.